The Tokuc Group was founded by the Tokuc brothers in 1974 as a family owned jewellery manufacturer. Through years of dedication and hard work, we have established ourselves as a highly distinguished player in the jewellery market.

The Tokuc Group’s knowledge and understanding of business ultimately led to additional ventures including animal husbandry and olive oil production. It is thanks to the our board members, and their devoted employees that we have since accepted a noble distinction as olive oil producers.

The Tokuc Group’s affairs in olive oil began with the establishment of the Tokuc Organic Dairy farm in Çanakkale. It was there on the farm where we established spiritual bonds with the nature of our homeland. In our early days, our organization planted nearly 17 thousand olive tree saplings in the region of Mugla-Kavaklidere where the Aegean and Mediterranean coasts meet. This was the foundation of our olive oil business which has since flourished.

Our first round of olive oil production was in 2018. Our product, marketed under the name of “GRANPA”, attracted the attention of important experts in the industry. Today, GRANPA has won multiple awards in international olive oil competitions taking place in Argentina, England, Italy, Israel, and, Japan. In 2019 our production facility was included on the list of best olive oil producers in the world. With the onset of our success, we have secured the rights to production with the Association of Boutique Olive Oil Producers. We aim to spread awareness that Turkish olive oil is one of the highest in quality around the world.

Moving forward, our goal is to establish the first olive oil production plant in Mugla- Kavaklidere and to provide education to small producers to help maximize the quality of production. With this guidance, it is our goal that farmers across Turkey will have the potential to establish themselves as top producers of olive oil in the world.


Granpa entered the history of the world's best olive oils in 2019. 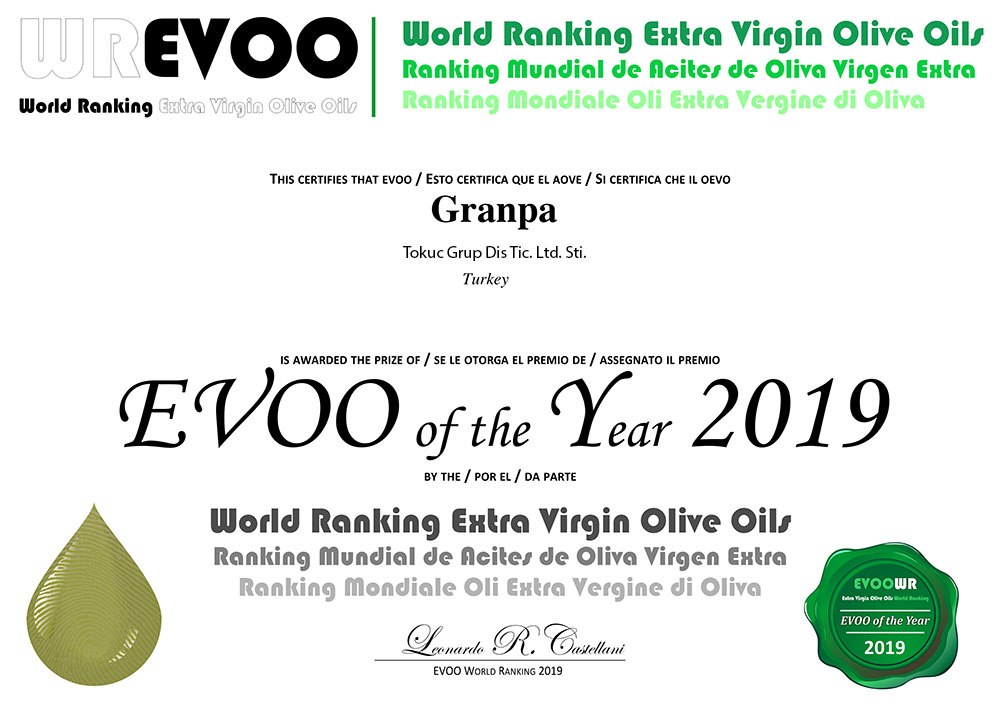